Noah recently sent me a photo of an old Lucasfilm Games design doc of mine. I don't know when I wrote this. After Maniac Mansion but probably before Monkey Island. 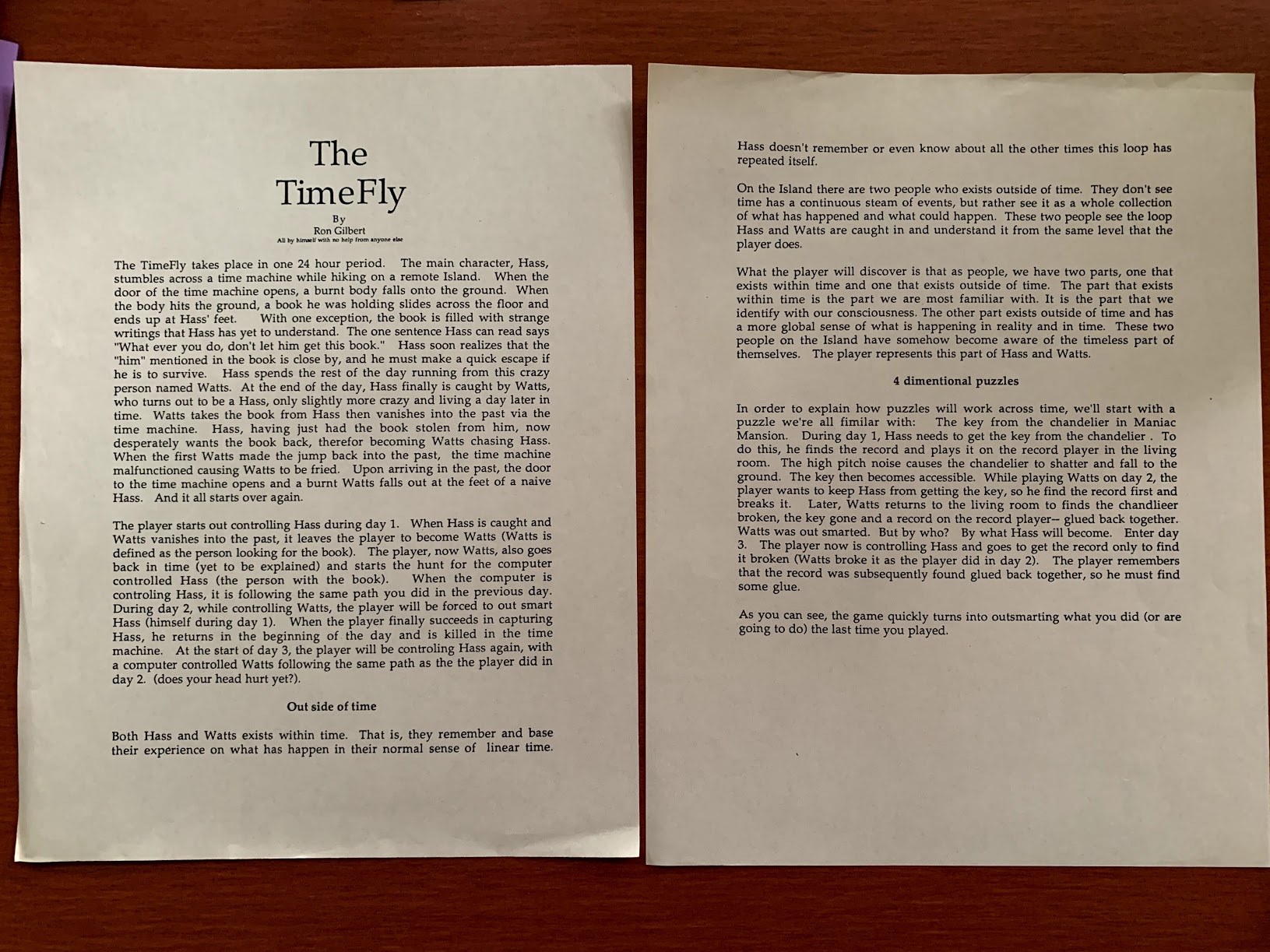 Well, this game deserves to exist and be played.

My god, do I need to play this game!

I'd put $15 towards the Kickstarter!

Seems like parts of this made their way into Day of the Tentacle...

I'm in for the Kickstarter campaign.

There is a good Spanish movie called Timecrimes (Los Cronocrímenes), which I saw on Amazon at one point, vaguely similar sort of thing, worth checking out (it has subtitles).
Synopsis is: "a man who unwittingly becomes part of a time loop and must stop his other selves from continuing to exist".
There was also one called Primer that was interesting but got kinda confusing by the end.

Well, fire up Kickstarter already ... I'm in for sure!

Primer is one of my favorite films: https://www.kevinmuldoon.com/primer-film/

I should probably give Primer another go with that link for reference...
When I saw it I remember it all making perfect sense until maybe around the last 15 mins or so, so it must have just been one or two things I didn't get.

The Spanish one is similar in that it's low budget, but cleverly thought out.

t0: Watts fries (I guess this means he dies) in a time machine due to malfunction. The book survives (quality paper).
t1: Hass finds the time machine, fried Watts, and the book.
t2: He tries to flee, as he feels uncomfortable but Watts catches him and robs the book from him.
t3: Watts runs to the time machine and jumps back in time (t0).

Does this make sense? Where does Watts (t2) come from initially? The time machine must have worked at least once or he stepped in from a parallel time line.

t4: Hass goes back to the time machine but there won't be anything because t0-t3 happens before.

When Watts jumps back without dying, things get interesting because then there exist mutiple Hass together and you need to deal with the situation. So, you need to fix the machine somehow or it might work jumping into the future (you could slightly freeze the character then too).

In the past, as Watts, you could trap Hass (and kill him, it's not a Sierra like murder as Watts still exists).
In the future, as Hass, you could, encounter the place where Watts is living rgiht now and try to get the book back from him. Watts forcasting this, could try to trap you upfront as well. Or Watts is still in the time machine, frozen, withthe book. Tons of options. Interesting could a combination, where you need both, Hass and Watts, working togethe rfor the progress and from a certain point on, you need to decide, there exist two possible solutions and you need to go with one of them, killing the other.

All according to the story/motivations at this stage. What a wonderful palyground!

I add Triangle and the short film Time Trap to the films already mentioned.

I would opt for a "Temporal Pincer Movement".

Hey Ron,  do you know the game "Deponia" from the German studio daedelic entertainment? The fourth and last game of the series Deponia Doomsday is very similar to the story of time line... In my opinion daedelic and esepicialy deponia made/is the best point and klick  adventure Games after Lucas Arts. Best wishes from Germany :)

This is a really interesting idea and so beautifully typeset as well!

Did you have any ideas about how to implement it so that the characters follow the old paths but still make it impossible for them to catch each other until the right time?

Our old docs were all done in LaTeX.

It won't be easy for Watts to deceive such a smart Hass.