The Tale of the Scurvy Raider

OK, you know what? Typing Pirate is hard.

Back when I was working at Lucasfilm, I used to have a giant Lego pirate ship. It sat across from my desk on this low end table and when the nights would grow long and the work day became tiring I would look over at the Scruvy Raider and it would remind me of what we were building; it would remind me of the soul of this game called Monkey Island.

When I left Lucasfilm the Lego pirate ship mysteriously disappeared. I remember cleaning out my office and saying my goodbyes then noticing the Lego pirate ship was gone. I asked around but no one knew what happened to it. It was simply gone, lost at sea, never to be seen again...

A few days ago when a giant package arrive at my door step. I carefully opened it to find this inside: 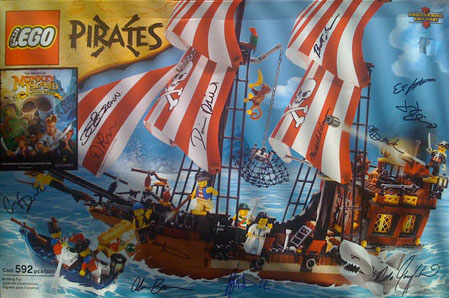 Attached to it was a note scribbled on LucasArts stationary that simply said "We found your pirate ship".

The Scurvy Raider II has come home, sailing into port for a reunion that onlookers called teary-eyed and joyful. It will once again become a beacon of light into the soul of what we are making.

Brian Goldberg Mar 16, 2021
Aha. So there is a trend with this Lego thing. I get it though. Every so often I still buy myself a Lego set for fun. There's some really great Star Wars Legos right now. I just got this one:(this is the link to Lego website page on it) https://www.lego.com/en-us/product/obi-wan-s-hut-75270

It's got all the parts that Luke uses to build his first lightsaber and also a Tusken Raider.