While cleaning out my storage unit in Seattle, I came across a treasure trove of original documents and backup disks from the early days of Lucasfilm Games and Humongous Entertainment. I hadn't been to the unit in over 10 years and had no idea what was waiting for me.

Here is the first batch... get ready for a week of retro... Grumpy Gamer style... 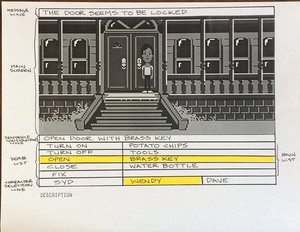 A early mock-up of the Maniac Mansion UI. Gary had done a lot of art long before we had a running game, hence the near finished screen without the verbs. 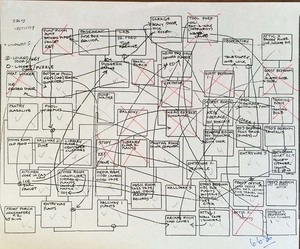 A map of the mansion right after Gary and I did a big pass at cutting the design down. Disk space was a bigger concern than production time. We had 320K. That's right. K. 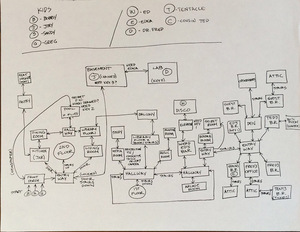 Gary and I were trying to make sense of the mansion and how the puzzles flowed together. It wouldn't be until Monkey Island that the "puzzle dependency chart" would solve most of our adventure game design issues. 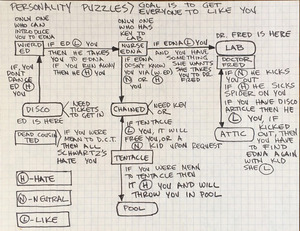 More design flow and ideas. The entire concept of getting characters to like you never really made it into the final game. Bobby, Joey and Greg would grow up and become Dave, Syd, Wendy, Bernard, etc.. 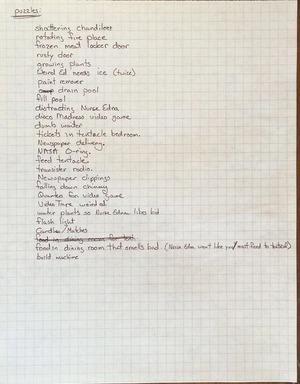 A really early brainstorm of puzzle ideas. NASA O-ring was probably "too soon" and twenty-five years later the dumb waiter would finally make it into The Cave.

I'm still amazed Gary and I didn't get fired.

Simon Edwards Oct 01, 2020
Just finding this now. MM was such an inspiration to much of what I'm doing, especially the character stuff. I'm hoping in the not-too-distant future we have an escape-room type experience that relies on characters doing things and even the idea of creating empathy with other characters to win.