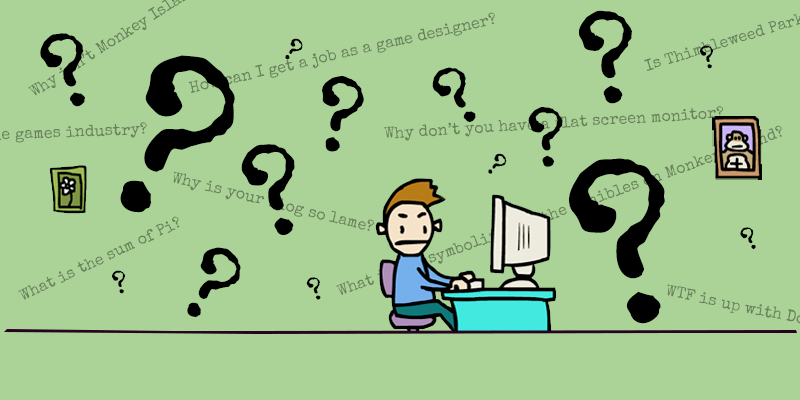 Yay, it's time for the answers to last Friday's Questions. I'm posting them a little early because I'm going skiing tomorrow. Yay! Skiing!

Let's get moving before global warming melts all the snow.

Romulus: What your programming environment looks like? Headphones and music while doing? How you divide your time between making games and living "real life" ?

I work on a Mac exclusively. When I need to compile a Windows or Linux build, I start up a VM. I can't listen to music while I program, I need complete quiet. When I write, music is helpful. Dividing my life between making games and real life is a struggle. I need to leave the house to fully disconnect. In the winters, I go skiing. I'm off skiing today.

Giorgio Novelli: Why did you leave Lucasfilm? I never found a satisfying answer on the internet and it still kind of haunts and confuses me.

I had worked at Lucasfilm for 8 years and learned a lot, not just about game design and programming, but also marketing, PR, and production and I felt like I needed to try it all for myself. I also had the idea of making adventure games for kids. I floated it by Lucasfilm Games and they weren't interested. It feels like the confusing thing for a lot of people about me leaving comes from them thinking I was leaving an amazingly successful franchise and why would I do that? That's because, at the time, Monkey Island wasn't. It sold well, but not amazingly well. Sierra Online was selling 10x the copies we were and it's was only 20 years later that Monkey Island has taken on this almost mythic nature in people's memories. That wasn't true back then.

PiecesOfKate: Considering the potential benefits of social media (such as Twitter) for promoting a game, versus your personal dislike of those channels - if you were to make another game would you rejoin, or avoid it? For clarity I'm referring to a personal Ron Gilbert presence, not the game brand.

I've thought about this a lot. If I was just releasing a new game, I don't think I would need to come back, but if I was doing a Kickstarter, it would be really hard to not leverage social media.

Gustavo: Hi Ron. I have always wondered about the "Extra 5 USD for Guilt Absolution" tier on the Kickstarter campaign that I and 3047 other people choose. Where did that idea come from? Did you expect to have so many people voluntarily choose to pay 5 USD more than the "standard" tier?

I don't remember who came up with this, but we knew it was going to be popular, and if not popular, then funny.

Nathan: Given the engine and assets of TWP, would a sequel be significantly cheaper / quicker to produce?

I don't think it would. The engine didn't add that much to the development time and cost. Maybe 20%, but saving 20% isn't significant and that savings would get eaten up in engine enhancements and me wanting to do more artistically with the presentation. Holding true to the spirit of Maniac Mansion (dollhouse view, no close-ups or cinematic presentation (think about the difference between Maniac Mansion and DotT)) saved us a lot. We could make a new game cheaper if it had the same look and feel, but that isn't creatively interesting for me. If I do another point-and-click, I want to push what a point-and-click can be, but still staying true to the form.

LostTrainDude: Where do you think improvement and evolution lie in the future of adventure games, considering their heavily-scripted nature? Is it in technology or in better design? What is it that you would like to see in an adventure game and didn't yet? This discussion rises from my curiosity in Chris Crawford's work on Interactive Storytelling (which you may be familiar with as well).

The future of interactive narrative is in true AI. I don't think AI will ever be able to tell compelling stories on its own (stories are compelling because they are soulful depictions of the human experience), but there is so much "filling" that goes on in an interactive story that AI would be perfect for. It's probably a couple of (human) generations away.

Zak Phoenix McKracken: Which are the most bizarre things you had to sign, to please your fans?

MK8bit: Do you think Thimbleweed Park would make a good novel too and what are your opinions on TP fan fiction and its publishing (fair use okay, but make-a-dime-with-em and be cease and desist'ed)?

I don't think Thimbleweed Park would make a good novel. The whole story is about it's medium and just telling you about it (in novel form) removes you from the whole point. I'm fine with fan fiction and long as it stays "fan". It's not so much about making money as not turning it into an industry. There is a lot of Thimbleweed Park fan art (and even people selling it), and I don't have a problem as long as 1) You can't use our trademarks, 2) it's not confused with official/licensed merchandise, 3) you're not making too much. It's a big grey area and I'll know it when I see it.

Nikita Sokolov: Thanks for our childhood! And my question is - who is your character in World of Warcraft? Is it an elf? Or an orc? Or a pandaren may be?)) And what is your class? A Mage?

Depending on my role in the raid I will play a (Horde) Warlock, Death Knight or Shaman. That said, I haven't played in over 3 years. Blizzard locked my account due to someone trying to hack it and it hasn't been worth the effort to unlocked it. Thimbleweed Park was probably the better for it.

Erik: Would you consider going back in the direction of Humongous Entertainment by creating games that are solely aimed at kids rather than "grown ups"? Do you ever think about that segment of games?

The kids market has changed a lot in the last 15 years and I don't find it interesting anymore. It's all about licensed games, quick disposable mobile games, or these odd social website type games. What I loved about making games at Humongous Entertainment was telling stories as adventure games. I don't think there is a big market for that anymore.

Dryade: If you never manage to make Monkey Island 3, which would be a tragedy, will you divulge the secret of Monkey Island or will it just vanish with you and keep us all forever in anguish?

Here is the deal with the "secret" of Monkey Island: It's just not that interesting now (it was back then). But over the last 25 years, it's grown to almost mythic proportions. If I told you the secret, you'd go "Oh... that's kind of dumb". If I was ever to do Monkey Island 3a, the trick would be to take the core of the secret and build it into something that lived up to the hype. I would never create a new or different secret (that's unfair), rather, it would be about making it more meaningful, relevant, and build on the mythology. I have an idea on how to do that, but it's not fully formed and sorry to disappoint everyone, but I don't spend a lot of time thinking about it these days.

I assume you mean "playtesting" since we don't do beta testing. But, at any point in development, from playtesters, bug testers, or us playing the game, we're constantly finding puzzles that don't work. That's a normal part of the design process. Most of the time it's a simple tweak like adding or changing a line of dialog or moving a clue. Other times we've had to take the entire puzzle chain and move it to a different part of the game (we did this with the Pigeons in Thimbleweed Park) and this can involve doing new art or animation. There are other times where the core of the puzzle just doesn't work, so you just cut it and never look back. Ideally, your production process is such that most of this happens when you're still in a pre-production and making large changes doesn't cost that much, but occasionally, you're making big puzzle edits late in the process and you just take the hit. I'd rather throw out good work than leave it in and diminish the experience. I can't think of a single large puzzle we cut in Thimbleweed Park once we got out of pre-production.

If you have any riveting questions for next week, put them in the comments. Make sure you start it with Q: